make an impact through Scholarhips 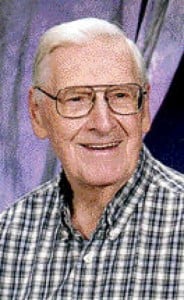 “When God wants to do a job, He takes His love and wraps it up in a man. I want to be one of those men.”

The Simons’ legacy is more than just the foundations of a school that has played an important part in taking the gospel to this part of the world. Bill’s legacy lives on in the lives of thousands of missionary kids that have walked the halls of Faith Academy – “fruit that remains”. In honor of this man and his family who have meant so much to our school, we continue his passion for helping students receive the education they desire through the Bill Simons Memorial Scholarship.

Bill was passionate about education. He and his wife, Flossie, were one of the early staff members at Grace Christian High School, today one of the premiere Christian Chinese/Filipino schools in Manila.

During this time he was instrumental in the beginnings of the Conservative Baptist Association of the Philippines. A bout with polio delayed their planned move to Laguna province. It was during this extended recovery time that he and Flossie were part of initial discussions about starting a school for the children of missionaries. Bill was elected Chair of the Formation Committee and then served on the first Board of Trustees of Faith Academy. He was one of the five original signers of the papers needed to start the school.​

Flossie was one of the first teachers when the school began on V. Mapa street in 1957. Their son, Russ, was a charter member and part of the first graduating class in 1965.

Altogether, Bill Simons served 19½ years on the Board of Trustees, most of that time as Chairman.

Bill and Flossie were deeply involved in education. They helped sponsor dozens and dozens of today’s Filipino Christian leaders through school. He ended his time in the Philippines as President of Asian Theological Seminary.

Bill passed away in 2012. He always lived with an eternal perspective – he wanted everything he did to be about the Great Commission. At the memorial service in Pennsylvania, his son Russ shared from his dad’s own words from some notes he penned in July 1958: “What is a missionary? A missionary is one who can never grow accustomed to the thud of Christ-less feet on the path to eternity.” Bill was one of the heroes of the faith – a missionary statesman, founding father, “Dad” Simons to so many. Dr. Simons, Lolo, a Godly man, a humble man, a man who lifted up Jesus.

Contribute to the scholarship programs and more by donating online. Thank you for your generosity.

A Legacy of Service

Faith Academy has established the Steve and Kay Abelman Scholarship to help current and incoming staff with their financial needs. Steven and Kay exemplify a life lived for Christ and a passion for education and Faith Academy is very pleased to have this scholarship named after them. 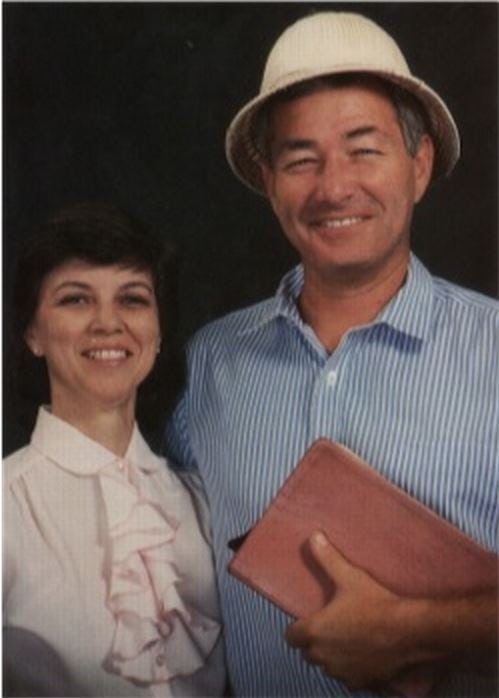 Steve was a native Californian, growing up in a nominally Jewish/Christian home. His father, a realtor, and his mother, a secretary, made a point of sending him to Sunday school, church, youth group and vacation Bible school. Yet, as a boy, he never accepted Christ as his Savior.

Steve Abelman attended Pierce College and Cal State University, where he graduated in 1965. At Pierce, he met Kay Wilson who became his wife in September, 1963. Kay was a Christian and Steve began attending church with her regularly. At 24 years of age, he became a Christian and his motivation for life changed. Steve had found meaning in teaching, but now he found new meaning in having an impact on people’s lives. He completed work on a master’s degree in 1972 and went on to teach children with learning challenges. Steve established good rapport with Mexican students and their parents. He also earned the respect of his peers and began a Monday morning Bible study/prayer group for teachers.

For the next ten years the Abelmans both taught school in Los Angeles. Kay’s talents had an impact on her home church, Grace Baptist of Newhall. She sang, directed children’s musicals and vacation Bible school. At church, Steve was shifting from spectator to participant. He served as a Sunday school teacher, youth sponsor, and camp counselor.

In 1974, he and Kay took their two daughters, Becky and Jill, on a sabbatical tour of North America in a rented 24-foot trailer. Mexico was especially stirring. They visited small churches, camped in the mountains, and lived for a week in an orphanage. God opened their eyes to missions. Could they be used in some way?

When the Abelmans heard of a need for teachers at Faith Academy, a school for missionary children in the Philippines, they applied and were accepted. Soon the Baptist General Conference World Missions Board authorized them as missionaries. Steve and Kay both began teaching at Faith Academy in Manila, Philippines in August of 1976. Steve taught 6th graders in a variety of classes from Life Sciences to Phys. Ed. In 1980, he became the Middle School’s principal and took responsibility for a major reconstruction of both the school’s curriculum and physical plant. He introduced many things in Middle School that still happen today including Friendship Week, the Spelling Bee, and the Speech Tournament. He began the still-thriving Outdoor Education program. Kay served in a number of roles at Faith. She taught first, second, and third grades, music and worked in the library. She was also the elementary principal.

While serving as principal of the school, Steve also began to lead discipleship/Bible study groups for Filipinos through the Metro Manila Bible Community. Prior to their home assignment in 1989, Steve felt the Lord was calling him to work full-time in discipleship and church planting, so he resigned as principal at Faith Academy. He led several discipleship groups, worked with new church plants in the Manila area and coordinated the short-term missionary program in the Philippines. A third area in which Steve became involved was teaching English at a Filipino high school.

ACSI (Association of Christian Schools International) Philippines was just a dream until April 1997 when some Filipino Christian school administrators moved for its formal organization. Steve was named ACSI Asia Director. The first conference for teachers and administrators was held in April 1999 at Greenhills Christian Fellowship in Ortigas Center, Pasig City. Membership grew, increasing steadily from 59 schools in 1999, reaching almost 300 in mid-2000. Steve conducted seminars and workshops throughout the Philippines to help teachers integrate biblical truths and principles in the academic curriculum of schools. During this time Steve also served on the Faith Academy Board of Trustees.

In 2004, their mission, the Baptist General Conference, asked them to work with missionary candidates and to be available to churches and missions committees in Arizona and California. They moved back to the US at that time. Steve was active in missions and education until his death. He was taken home during his early morning devotions on June 13, 2007. Steve and Kay were to be honored at the Baptist General Conference annual conference a few weeks later for their 25 years of service with BGC in the Philippines. 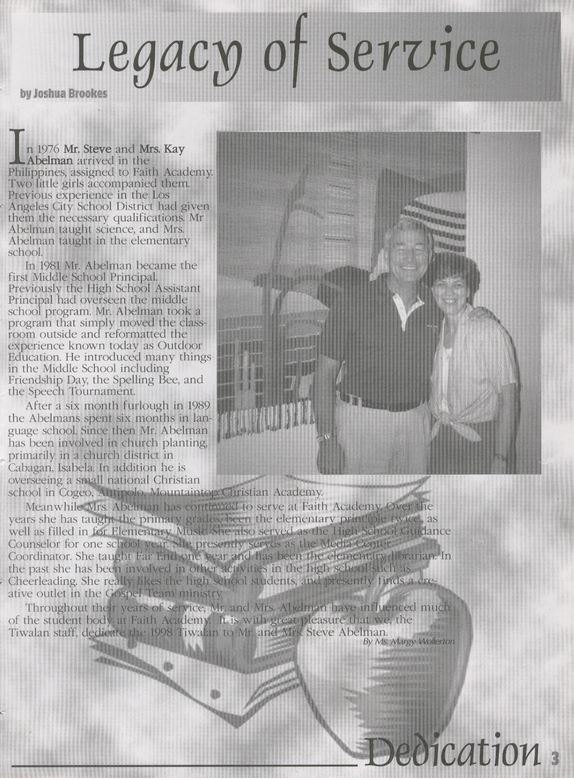 See other ways to partner with us

Forming Christlike, lifelong learners through a dynamic, relevant education, especially for the children of missionaries